GARYTALK.COM – Most true Journalists are NOT “the enemy of the people” and do NOT produce and publish “fake news” for their readers and viewers to consume, as the 45th United States President, Donald J. Trump, attempts to mislead his followers to believe. Coming from a career of gathering and reporting news as a Journalist for several decades, now that I’m semi-retired, I can’t resist weighing in on what’s been happening recently. President Trump is constantly confusing the issue, and, possibly purposely, or inadvertently, causing extreme harm to the American democracy, in many ways, but to narrow this down a bit, this is about his claims of “fake news”. Calling it that is far from the truth.

True Journalists, newspapers, television and radio stations, magazines, and other news outlets, are protected by the U.S. Constitution under the First Amendment, upheld this week by the United States Senate when it passed a resolution, by unanimous consent, affirming the news media are “NOT the enemy of the people.”

The U.S. Senate move comes amid an initiative led by the Boston Globe editorial board in which more than 350 news organizations published editorials promoting the freedom of the press. The editorials were published in response to President Trump’s repeated verbal attacks on journalists, in which he has called mainstream press organizations “fake news” and “the enemy of the American people.”

Back when Donald Trump was campaigning for votes he hoped would elect him to the position he now holds, he often referred to so-called “fake news” stories put out by “fake news” reporters and media operations during speeches to adoring fans. He almost always turned to that line of talk whenever a truism was spoken or written about him that he didn’t like. Most of the country did NOT believe the false campaign talk, chalking it up to a man who desperately was clutching at straws to please appetites of those attending his campaign rallies. Unfortunately, the campaigner learned rapidly that his voracious base grew in response to the rhetoric, so he continued the tactic without concern for the long-reaching havoc it could do to our democracy and the American way of life. 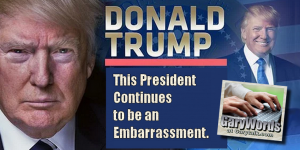 The majority of United States residents and the working men and women in media newsrooms, assumed, once Trump, the campaigner, was sworn into office and sat behind the big desk in the Oval Office, his demeanor would adjust to the responsibilities of being President. Alas, it soon grew worse. If he would have become a responsible President, he would have begun to tell the truth to the American People about all things involving his presidency and stopped misleading people into thinking of the mainstream media as “not my enemies”, but, instead “enemies of the people”, as he put it.

However, in addition to telling thousands upon thousands of documented lies to constituents about many other subjects as President, whenever he speaks or tweets, he constantly, reinforces, the fallacy that the news media cannot be trusted to tell the truth about him. The trouble is, the respectable news media must constantly call attention to the false misrepresentations of the truth that President Trump expects people to believe when he utters it, that, to some people, it may seem like Journalists are just out to get him, which, in general, is NOT the case.

It is the responsibility of the free press to represent news in a truthful way, by not reporting falsehoods as if those falsehoods are accurately portraying what is really going on. If President Trump tells an outright lie, inaccurate, misleading comments or misrepresentations of fact, it is NOT the responsibility of a reporter or news entity to just pass that lie or falsehood on to readers and listeners as the absolute truth of the matter. That could not and would not pass for a true account of the situation.

Trump continually, seemingly, habitually, uses highly inaccurate descriptions, words, and, sometimes, outright whoppers, so, the news media, to do their jobs properly, must call attention to the attempts by Trump to pass off what he says is the truth, when it, indeed, is, simply, NOT the truth. The extreme abundance of inaccurate information uttered from President Trump’s mouth, and false information from the White House attributed to Trump, or in support of Trump’s words, just makes it seem like the news media is picking on Trump. When in reality, Journalists are just doing their jobs to properly inform you.

It is NOT the responsibility of the men and women who work in the newsrooms of the country to blindly repeat what the President says is true, when it isn’t, or if it isn’t. Freedom of the Press means, NOT that we can tell you anything we want to, or a government official prefers, even if it is NOT true. Sometimes it is important that reporters and news anchors must call attention to the big and small lies, and misdirection from some politicians, no matter who they are. Calling attention to the lie is often more newsworthy, because it gives you, the listener and reader, the true picture of what is going on in the White House, Congress and other branches and offices of the government.

The true facts of the matter is, the lies and misinformation that the current administration sometimes passes off as truth, is the real “fake news”. It is the job of members of the Journalism community to turn the “fake news” they are served with, into the totally accurate, “Real News”, you deserve. Many discerning people believe the vigilance and patriotic attention of Journalists to point out the inaccuracies, misdirection, and fabrications by subjects in the news, including our current President, easily makes Real News Journalists, newsgathering heroes.

The news media is the necessary filter for a democracy to thrive. If news people would just pass on the words from any politician without fact-checking for accuracy, they would be falling down on their roles.  By constantly striving to be unsung, invisible heroes, reporters, anchors, newspapers, news channels, stations, networks, editors and publishers, have been and are, often quietly (and sometimes, not so quietly), working daily, to “Save Democracy” for you and future generations.