GARYTALK.COM (02/17/2017) – I’ve been trying to give our new United States president, Donald J. Trump, time to work out the bumps of his new administration and settle into, confidently, being the best president he can be, for all of the country. I have refrained from committing in writing, a critical look at his presidency, in hopes that he would settle down into “being presidential”, and have given him many opportunities to do so. At this point, based on his behavior so far, I’m not sure it’s going to happen. 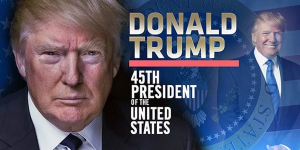 The campaign rhetoric of the Republican candidate, Donald Trump, caused a huge fear to spread among multiple millions of people from many walks of life who did not ever want to see a President-Elect Trump, but, he, indeed, was sworn into the office in a public ceremony, televised for the world to witness, January 20, 2017. What the majority of voters feared, happened. He won the Electoral College voting, December 19, 2016, while losing the Popular Vote at polling places, November 8, 2016, Bigly, or is it Big League?

The self proclaimed Billionaire, is now President Donald J. Trump, the 45th president of the United States of America, succeeding President Barack H. Obama. Trump promised his supporters to “drain the swamp” in Washington D.C., at rally after rally, televised to millions of people on the 24 hour CNN, MSNBC and FOX-NEWS channels, word for word, as it happened.

We all learned during his first few days in office, that he then planned to appoint a Huge number of rich people into positions of his Presidential Cabinet, in his efforts to Drain The Swamp. Some of the appointees, on the face,  may not have the Empathy and Compassion needed to appropriately serve all of the people of this country, properly. Some do not seem to have other abilities needed to fulfill their duties. We can only hope their experience in non-governmental endeavors will make up for their lack of real knowledge of how to get things done in government.

The wall-to-wall coverage of those rallies by the news networks, provided Trump with multi-millions of dollars in free advertising and exposure to potential voters who could not make it to the local campaign rallies. During the rallies, the news outlets allowed candidate Trump the luxury of using whatever rhetoric he chose to use, including lie upon lie, over and over, about, first his fellow Republican primary candidates, followed by verbally, tearing down Democrat Hillary R. Clinton, during the general election.

You would think, if our new president was as “on the ball” as much as he likes to tell people he is, you would think, he would be thankful for all of the free advertising the news networks threw at him, without charge, during his campaign. If Trump has as much sense as we hope our President should have, or at least, we would like him to possess, he would come out further ahead by trying to get along with the Free Press, including the so-called “mainstream” news media, instead of constantly attacking the Real News, Real Truth, Real Facts, professional, news outlets, and calling them fake. Making enemies of the press, is a very undiplomatic way to make friends and influence the very people he needs to convey a more positive message to the country, and, the world.

The mainstream news media, made it possible for Trump to smear mud of every description on his opponent, much of which was untruthful, rants, repeating the “fake news stories”, full of “fake truth”, and “fake facts”, from “fake news operations”, passing them off as real, all designed to discredit his opponent. Some of the fake news may have been with the assistance of the Russian Government, or not, we don’t know for certain, yet. However, it’s a fact that the fake information was out there, and being re-posted, Shared, and repeated, by not only Trump, but, his followers, too.

You know the old saying: “If you tell a lie often enough, passing it off as truth, after hearing or seeing it repeatedly, to the listener, viewer or reader, the lie becomes truth in their minds, especially if they have no exposure to the Real Truth and have been depending entirely on the Alternate version of reality.” Or, something to that effect.

Unfortunately, President Donald J. Trump, seems to think he needs to constantly be in “campaign mode”, and, has not yet switched to being “Presidential”. The question on more and more minds, even in the back of the minds of some who voted for him, when will he become a President we can all be proud of?

He has the job. Now, it is time for him to grow up. Put the petty, childish, complaining, whining and bitching behind. Stop the pattern of telling tall tales that are not based in reality. At this writing, Mr. President, you are 70 years old. It’s high time to stop responding to your lesser impulses. Become the Adult In The Room. When it’s all said and done, that’s what we all really want, and expect of you, whether we voted for you or not.

Candice Bergen Dated Trump When She Was 18.