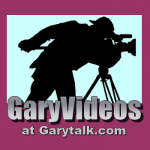 GARYVIDEOS is the place on Garytalk.com where you can find video recordings of past, present, and future television shows and programs that Gary W. Morgan has been involved with during his career from 1966 forward. The initial batch of GARYVIDEOS are now online to view on desktops, tablets, laptops, smartphones, and other similar devices. More entries will be added as more programs are transferred from the original recordings to digital, then processed to make the early recordings brought back to life in a viewable show to be seen on your computerized device.

Click or Tap Here to Go To GARYVIDEOS Entries.

Articles By Gary W. Morgan On Other Websites: